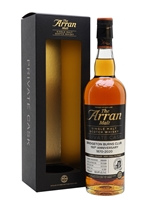 A limited-edition 2009 Arran single malt matured in a single sherry hogshead and bottled in 2019 to celebrate the 150th anniversary of Bridgeton Burns Club. A bold, fruity single malt with notes of prunes, raisins, dark chocolate, hazelnuts and oak spice throughout the palate.