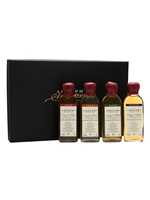 The sixth edition of Nightcap from Adelphi contains four 10cl bottles – one each of: 15-year-old Ardmore, 27-year-old Cambus, 23-year-old Longmorn and 10-year-old Bunnahabhain. A great gift for anyone who likes to try a range of Scotch whisky styles.