On the Sticky Toffee Pudding Trail

Some folks like to go to Scotland to bag Munros or follow the Whisky Trail. My recent trip to Scotland had a much more flavourful goal: I made it my mission this trip to stake out a Sticky Toffee Pudding Trail.

While this dessert is known (and loved) in Britain, I have to tell you it is relatively unknown in the United States. I had never heard of it until 1996, while on a family trip to Scotland with my new husband and his family. My brother-in-law ordered this warm, brown, syrupy mass at a pub in Portree on the Isle of Skye. He dug in with obvious relish, and smacked his lips contentedly. Intrigued, I asked for a forkful. You can guess the rest—it was wonderful and I was hooked. 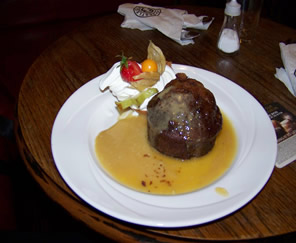 I’ve tried only once to make this dish myself—from a Delia Smith Christmas Cookbook. It came out pretty well (and the toffee sauce you make for it is wonderful on ice cream). But, in the nature of puddings, it’s a rather long process that involves molds and boiling for multiple hours. So it’s easier for me to wait for a trip to Scotland to indulge. We’ve had some wonderful STP’s (let’s just use the abbreviation going forward) in trips past—Brown’s in London, a wonderful bistro in Inverness, and at the Castlecary Hotel/Pub just outside Falkirk.

STP at the Castlecary was one of my last treats during our May 2007 trip, and it was a goal to repeat it in our September 2009 trip (more on that later).

I arrived on Wednesday, September 16 and was greeted by happy husband holding roses (quite a lovely welcome). A splendid fry-up breakfast followed by a wee nap and we were good to go.

STP 1 was at the Alloway Inn, on our pilgrimage trip to the Burns Cottage in the Homecoming Year. The cottage is much as it has always been, I suspect, but the adjacent grounds were torn up to put in a Victorian (!) garden. It seemed a very odd construction schedule there and at the nearby Burns Center—where you could shop or eat, but see nothing authentic from Robert Burns’ life. We had a lovely lunch at the Alloway Inn, however, and the sticky toffee pudding there did not disappoint.

STP 2 was the very next day, at the downstairs Café in Rogano’s in downtown Glasgow. This was very good STP, as was the rest of the 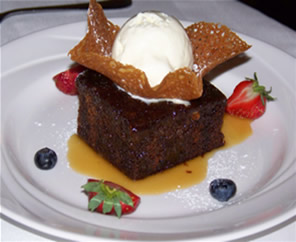 meal. Since the food is every bit as tasty downstairs as upstairs—and at a lower price—you’d be well-advised to check it out. The fish and chips were wonderful.

STP 3 was at the Plockton Inn in the lovely village of Plockton. Jim inquired if the STP could be served with both whipped cream and ice cream—which it was. This was a superior STP (mind you, NONE of them were bad). But from some of the recipes I’d looked at over the years, I knew that dates are a part of the typical recipe, and this STP had a bit more texture. It was very nice.

STP 4 was the least remarkable, and served at the Scot House Hotel in Kingussie. Like the other meals we had at this hotel, it was adequate but not memorable. It was here, however, that it dawned on me that most of the STPs were remarkably uniform and they are probably bought in bulk (hmmm….I never thought to look for them at Costco!). No matter—I think it merely means that most are going to be at least good, and a few will be great.

Next STP was in The Snug at the Castlecary House Hotel, and it did not disappoint. I think this was the most attractive presentation. The accompanying (soft-serve) ice cream was piped into a crisp tuile cookie, and the plate was garnished with a cut/fanned strawberry and a quince berry. It was really lovely, and really tasty.

Our fantastic hosts included STP in the at-home meal the next night. This was a multi-serving pud, and we all partook from the mold. 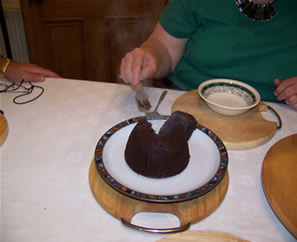 So my two-week sojourn included no less than six Sticky Toffee Pudding experiences. I have come to the conclusion that, like whisky, there are no bad Sticky Toffee Puddings, just some that are better than others. My top choice is the Castlecary version, and I know I will make it a destination stop on the next trip to Scotland. A very close second place goes to Rogano’s, where the meal is just as lovely as the dessert. Third would be the Plockton Inn (and ask for both whipped and ice cream!).

But don’t hold back and don’t dismiss, fellow-chocoholics, the attractions of this warm, sweet, chewy, dense, caramel-flavoured delight. Paired with cold, smooth vanilla ice cream, it’s a fabulous way to end a meal (and I mean, breakfast, lunch or dinner!). Enjoy!