Everyone is hearing about the credit crunch, but that does not stop us wanting to have some nice treats. How about using up some store cupboard left over’s from Christmas. Every year I have half filled packets of Christmas cake ingredients, so why not try the following Whisky Recipe:

Put a selection of your left over dried fruits, currents, raisins, prunes, candied peel, really any dried fruit mixture and marinate in a good single malt, I would put about four generous tablespoons, obviously dependent on how much fruit you plan to soak. Then add the zest of an orange and a lemon and soak overnight. I also like to put a cinnamon stick into the marinade. 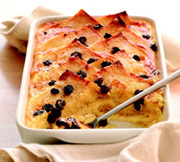 Get your left over bread and butter generously on one side.

Put a layer of your boozy fruit into your buttered serving dish ensuring that all juices are incorporated (but remove cinnamon stick), then layer the buttered bread and repeat as if making a lasagne. Remember to ensure the final layer is placed butter side up overlapping slightly. Then mix 2/3 large eggs, 3oz caster sugar and half a pint of double cream. Obviously the amount of eggy/cream mixture required will be dependent on how large a dish you are making. As you can see this is not a precise recipe and allows for the cook to use their instincts. I like to sprinkle a dusting of cinnamon on top prior to baking in the oven for about 40 minutes until the surface is golden and crunchy.