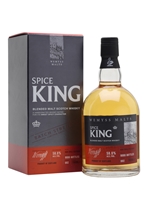 A limited-edition release from independent bottler Wemyss, part of their Batch Strength series. A blend of single malts from across Scotland chosen for their spicy character, this was aged in Sherry hogsheads for additional notes sweet, peppery and woody spice notes. The nose is aromatic and spicy; notes of cinnamon, nutmeg, pipe tobaccos and sea-salt are balances by sweet caramel notes. The palate offers notes of demerara sugar, carrot cake and orange zest before cinnamon and pink peppercorn build into a long, sweet finish with plenty of caramel.