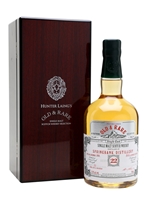 A 22-year-old whisky from Springbank, bottled by Hunter Laing as part of the Old & Rare series of top-quality whiskies. This one was distilled in 1993 and sat in a refill hoghsead before bottling in January 2016.