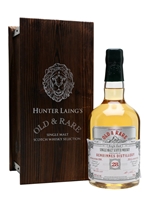 A 1985 vintage Benrinnes bottled by Hunter Laing as part of the Old & Rare series. Distilled the year the distillery's Saladin box ceased to be used and malt was imported, this has notes of syrup and citrus.