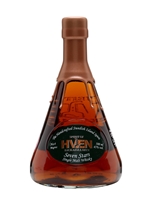 Megrez is the fourth release in Spirit of Hven's Seven Stars series. This lightly peated release has notes of pepper, vanilla, figs and raisins with a hint of sherry.