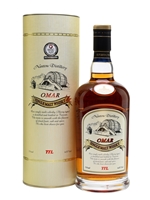 Nantou is the other distillery in Taiwan. Built in 2008 by the state, Omar single malt was launched in 2014. This is the bottling aged in sherry cask, resulting in a full-bodied and intense whisky with notes of caramel, toast, dried fruit and a hint of smoke.