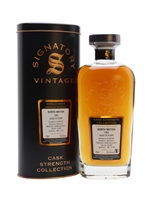 A 1991 North British single grain whisky from independent bottler Signatory Vintage that was matured in a refill sherry butt for three decades, before being bottled in July 2022 as part of its Cask Strength Collection.