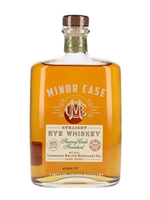 Bottled by the Limestone Branch Distillery, this rye whiskey is named after the founders' ancestor: Minor Case Beam. Part of the famous bourbon-making Beam family, Minor Case worked as a distiller until 1920, when prohibition forced him to cease, and died less than a year after the ban on his life's passion was lifted.

This is a two-year-old rye whiskey which has been finished in sherry casks for six months. It has notes of fruit sweets, warm spices and oak.