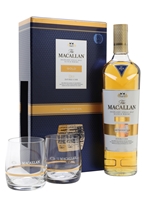 This gift set contains a bottle of Macllan Gold and two tumblers. Macallan Gold was released in late 2012 as part of a series of colour-themed bottlings introduced to replace the distillery's age-statement expressions. Produced from 9-15yo first fill and refill sherry casks, it was designed to sit between the now-defunct 10yo Sherry Oak and 10yo Fine Oak bottlings.