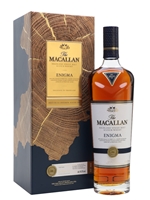 Macallan Enigma was released as a part of the Quest Collection, aged exclusively in European oak sherry casks from a single cooperage in Jerez de la Frontera, Spain. Enigma is intensely fruity and oaky, with aromas of raisins, vanilla, sweet pears and cinnamon. The palate holds more raisin and wood spice notes, followed by ginger, cinnamon and oak.