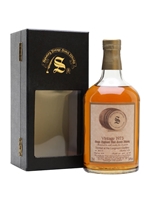 A 1973 vintage Longmorn selected by independent bottlers Signatory. This was aged in a single sherry butt for 21 years before being bottled in December 1994.

Please note: this bottle contains sediment.
Please note that this is an old bottle and the closure may have deteriorated; care should be taken when opening the bottle. As such, the item is sold as described.