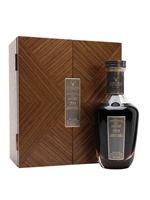 A 1966 Linkwood single malt from independent bottler Gordon & MacPhail, matured in a first-fill sherry hogshead for more than half a century, before being bottled in December 2020 as part of its Private Collection. Aromas of rich fruitcake, orange zest, cinnamon and nutmeg fill the nose, complemented by notes of white pepper, blackcurrant, raspberry, dark chocolate and Seville orange throughout the palate.