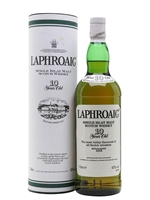 A litre bottle of 10-year-old Laphroaig from sometime in the second half of the 1990s - this was release after the Royal Warrant was awarded to the distillery in 1994.