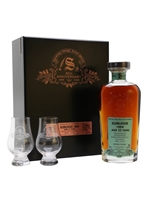 A rich and complex dram from Glenlossie, specially selected by Signatory Vintage as one of the entries in its impressive 30th Anniversary collection. This was distilled on 4 October 1984 and bottled after 33 years in a refill sherry butt on 27 July 2018. The result is a big dram filled with strawberry sweetness and balanced by coffee and nutty notes.