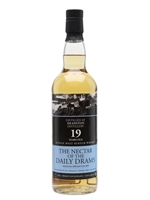 A 19-year-old Deanston single malt bottled by The Nectar for its Daily Drams series. This 1999-vintage – bottled in 2018 – is typical of Deanston, with a malt-forward character supported by dried fruit and spice.