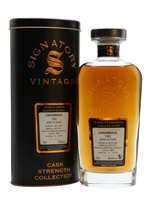 This single grain was distilled on 8 December 1982, the year before the distillery closed. Matured in a refill-sherry hogshead for 34 years, this has notes of dried fruit, chocolate and orange.