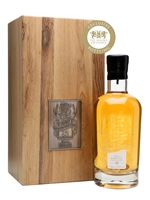 A special Caol Ila, selected by us and bottled as part of the Single Malts of Scotland range as the first Director's Special release. It was all done for the inaugural Whisky Show: Old & Rare in Glasgow and went down a storm at the show. It's a well-aged Caol Ila, balancing the distillery's mineral and smoky character against stacks of fruit and honey.