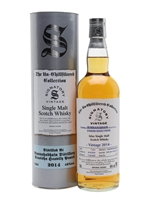 A 2014 Bunnahabhain Staoisha single malt from independent bottler Signatory Vintage that was matured in a handful of hogsheads for seven years, before being bottled in June 2022 as part of its Un-Chillfiltered Collection.