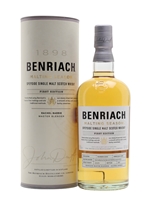 A 2012 Benriach single malt that is the first release in its Malting Season series. Made with hand-selected Concerto barley that has been floor-malted using traditional techniques, this whisky was matured in both ex-bourbon and virgin oak casks chosen by master blender Rachel Barrie. The palate offers notes of barley sugar, almond fudge, poached pears, apple, vanilla, honey and rich nuts that linger in the finish.