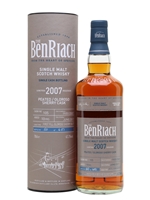 From Batch 14 of Benriach's Single Cask bottlings, this 10-year-old peated single malt has been aged in a first-fill Oloroso sherry butt, cask number 105. All whiskies in Batch 14 are non-chill-filtered, individually hand-numbered and bottled at natural colour.