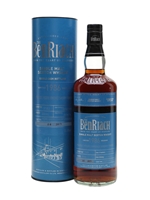 One of two 1986-vintage whiskies in Benriach's 13th batch of single-cask releases, this is the darker of the pair. This peated whisky was finished in a Pedro-Ximenez-sherry puncheon, adding notes of dried fruit and dark chocolate to the smoke.