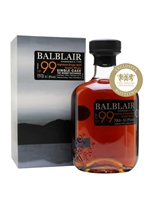 Aged in a single sherry cask and selected by The Whisky Exchange, this is a rich and warming example of Balblair. Distilled in 1999 and bottled in its mid-teens, this is juicy and mouthwatering with notes of fruit cake, apricots, stewed fruit and butter toffee.