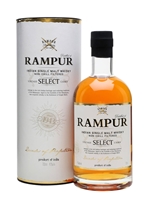 Rampur Distillery was the original name for Radico Khaitan, India's fourth largest spirits company. It has been making whisky for more than half a century, and started producing malted barley for its blends in 1990, but only launched its first single malt for export in 2016. This is a creamy and malty whisky with notes of vanilla, apricot and apple.