Murder, Mystery and Whisky at the SMWS

There has been a murder… was the cry that was heard from outside the Hunter Suite at the Scotch Malt Whisky Society on Friday night.

On the evening of the 25th May a varied bunch of Whisky and Foodie writers gathered at the SMWS for a whisky and food pairing event (including fellow Whisky reviewers Edinburgh Whisky Blog duo Tiger and Graeme) – it was to be an evening of great drams and fine food, and a few unexpected guests.

After initial introductions we were seated and treated to a light introduction to the Society by Georgie (Society Brand Ambassador), we then began our evening with a  – 35.63  Stylish and Aristocratic (a 38YO Glen Moray) it was a full and rounded, bursting with vanilla and spring flowers, the finish was mouth coating yoghurt and honey, a great dram to start the night.

We then moved onto our starter – Roast Scallops with Caramelised Lomo, Georgie had chosen 3.181 Spritzy, Lively and Stimulating (a 15YO Bowmore) to accompany this course. This dram showcased the orange citricy zesty sauce from the scallops, it was tantalising and alive, there was also the signature characteristics of Bowmore in there, the sweet peat smoke and the seaside air. 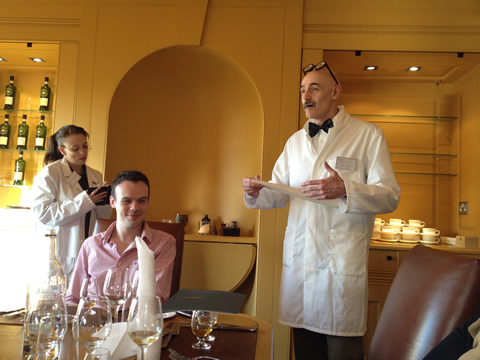 Next up, dinner. Gressingham Duck Breast, White Cabbage, with Confit Duck and Caraway Sloe Jus and to accompany a 48.26 In a Wild Garden, Late Summer (a 23YO Balmenach). Again another zesty spritely dram, but had the added depth and complexity of fresh fruit and black pepper a few earthy notes, an overall soft and sweet mouth filling Whisky.  This dram when shared with the perfectly cooked duck breasts was outstanding, a true partnership.

Finally dessert, Elderflower and Champagne Jelly coupled with 73.49 Ice Cream Sundae (a 12YO Aultmore). A soapy and red fruit delight, with a chilli spice bite.  The finish was long and tingly, mouth watering.  This Whisky added depth and sweetness to the delicate raspberry pudding.  Fabulous marriage. 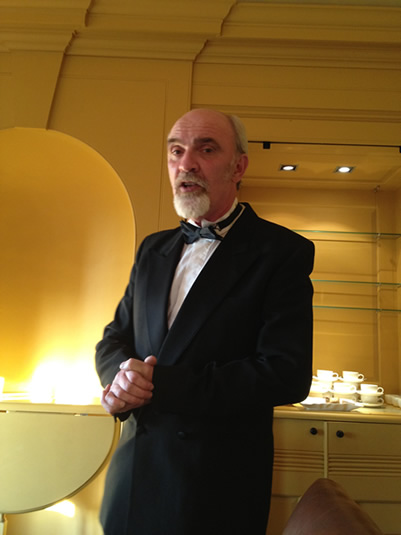 As an extra treat Georgie provided us a dram perfect to complete an evening of 1st class cuisine. 106.18 Bottled Essence of Summer (a 27YO Cardhu) Sumptuous heavy floral notes, masses of butter and honey with a lingering note of Turkish Delight and cloves, long spicy finish.

Throughout the night not only did we enjoy Georgie’s  knowledge of the Societies Single Cask drams, but we were also enlightened by the animated Mr McAlveeny about the local museum and some special Whisky related artifacts including a Quaich and ‘The’ Holy Grail.  We were then entertained by a couple of MAD scientists from ‘Cavonia‘ who are in the process of trying to create a substitute Whisky, we were allowed to sample this, it was blue and green, need I say more….

Unfortunately the night then took a turn for the worse, and just 10 minutes after our informative chats from this crazy crew, Sean Connery appeared and informed us that Mr Mcalveeny had been found murdered in the basement of the Society. Apparently this situation was not serious enough for the police to be called and instead left in our capable hands.  We were all allowed to interogate whoever we suspected, directing just three questions at who we believed looked/acted/sounded guilty. 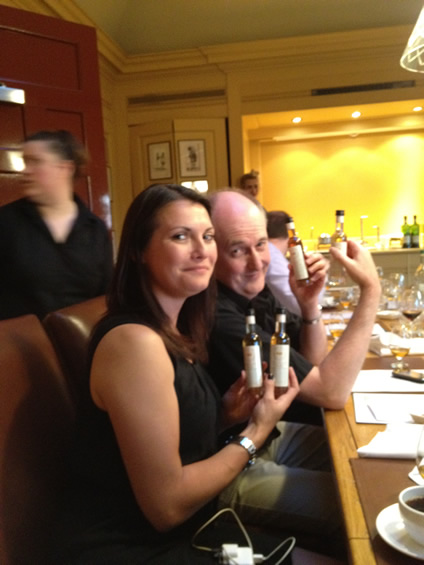 I did feel like a CSI!  Sean Connery was fantastic – a true lookalike and the accent was spot on.

It was a very entertaining evening and enjoyed by everyone – of course it is always great to share and enjoy Whisky anytime, but these circumstances were very unique.  The food, the drams and the Murder Mystery team were faultless.  It also helped that Bill from Discover Whisky and myself were spot on and guessed the murderer, weapon and motive.

The SMWS hosts events all year round in all three of their UK venues and the team involved in performing the Murder Mystery were Herald Events.  If you are looking for a different Whisky themed night then this has to be one of the most entertaining ways to learn about Whisky and try your skills at a little detective work.