On Thursday 25th June 2009 a previous guest taster and his wife (Philip and Lorraine Giles) came over from Ireland for a little break and to do another tasting with the Whisky Boys.

On this occasion Philip brought over a plastic bag containing a selection for our two/three tastings.

Friday 26th June 2009 Jim, Dougie and Philip sat around Jim’s dining table with all the glasses and water to the ready, it was then that Philip from his plastic bag brought forth this jet black box, once opened revealed a bottle of Irish Whiskey – Kilbeggan 15 Year Old, and what a good looking bottle it is.

Kilbeggan is produced by The Cooley Distillery plc who are based in Riverstown, Dundalk in County Louth.

Their you will be able to read ( a full press release is available) about their exploits in L.A. and New York and the accolades that they achieved, some of which are:-

Cooley Cleans Up at the 2009 World Whiskies Awards

Lets do some tasting. 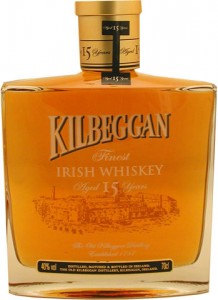 Distilled, Matured and Bottled in Ireland.
by The Old Kilbeggan Distillery,Kilbeggan, Ireland.

Colour…Deep Amber with a slight rose tint. (a wee note, Philip found it hard to locate the wee rose tint)

Finish…Medium length, dry, light spice with a hint of tobacco in the middle.

Taste…Very smooth and far too easy to drink.

Finish…Long and with a tingle on the lips like liquorice.

Nose…Sweet honey and spice with that aroma twist that only Irish Whiskey can give.

Taste…Dried fruits a little spice and quite malty.

Well what can we say Phil, you excelled yourself by bringing this fabulous Irish Blend over for a tasting, big thanks from the Whisky Boys.

Philip has promised that the next time (very soon we both hope) we go over the sea to Ireland he has promised to take us south heading for the Cooley and the Kilbeggan Distilleries.

The Whisky Boys certainly would look forward to that and to take many photo’s and write articles based on our trip. (need to be careful here, cant take to many malts on board or our memories of what could be a great wee trip might be misplaced.)

Well done Kilbeggan, you have produced a great blend and as your awards show, you can produce a world class Whiskey, now you have to get it out there and into the shops and supermarkets so many more can appreciate how good you wee dram is, well done again

Back to an earlier part of this article, Jim and Dougie are now on tenterhooks awaiting the next bottle to come out of the “plastic bag” which Phil said should be in the next day or two and probably round at Dougie’s hoose.

p.s. Dougie, “do you think Phil is trying to become a Whisky Boy?” Jim.