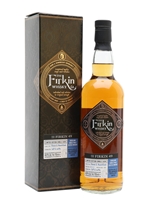 A 2012 Tullibardine single malt from indie bottler The Firkin Whisky Co. that has been matured in a single cask, which has held both oloroso and Amontillado sherry. The result is notes of creamy butterscotch, toffee, malt, fresh fruit, cinnamon, shortbread biscuits and oaky spice throughout the palate.