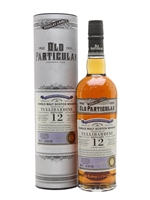 A 2010 Tullibardine single malt from independent bottler Douglas Laing that was matured in a single sherry hogshead for 12 years, before being bottled in March 2022 as part of its Old Particular series. Aromas of dark fruits, cinnamon, cereal and tobacco fill the nose, complemented by notes of honeycomb, macerated summer fruits, summer pudding, mint and hints of charred oak throughout the palate.