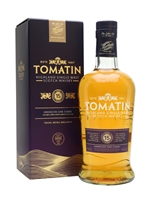 Originally released for travel retail, Tomatin 15 Year Old is light and fresh with notes of honey, toffee and spice. A superb easy-drinking whisky.