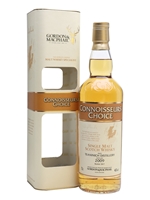 A 2008 vintage whisky from Teaninich, bottled as part of the Connoisseurs Choice range by Gordon & MacPhail in 2017. Thanks to it's popularity as a blending malt we don't see all that much from Teaninich on the market, so it's good to find an ongoing indie release non-chillfiltered and at 46%.