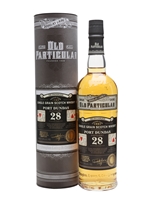 A bottling of single-cask single grain whisky from the closed Port Dundas distillery.

An aromatic, sherbety sweet nose runs to an equally sugary palate with vanilla, toffee and rich molasses. The finish displays a cappuccino character with crushed nuts and maple syrup - tasting notes from the producer