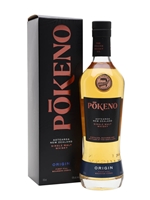 Origin comes from Pokeno in New Zealand's Waikato region. Made from locally-grown barley and matured entirely in first-fill bourbon barrels, this shows off the purity of the distillery's spirit. The resulting whisky is of a sweeter style with notes of grapefruit, honey and creamy toffee.