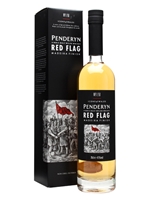 The first bottle in Penderyn's Icons of Wales series, Red Flag commemorates Dic Penderyn, hanged for a murder that he didn't commit during the Merthyr Rising. The Red Flag of the title is the traditional flag of social protest, which Penderyn claim was first raised during the unrest. The whisky is finished in madeira casks and bottle at the distillery's now traditional 41%.