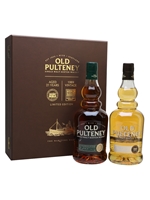 A very limited edition twin-pack, giving Old Pulteney fans a chance of grabbing an impressive, award-wining pair of drams before they disappear for good: the already discontinued 21 Year Old (Jim Murray's World Whisky of the Year 2012) and the sold out 1989 vintage (World's Best Single Malt 2016, World Whiskies Awards). The 21 is the most refined in the old Old Pulteney range, with a host of orchard fruit and gentle spice. The 1989 is a very different beast, with a lick of peat smoke and lashings of citrus. A welcome last chance to grab two of the distillery's best whiskies.