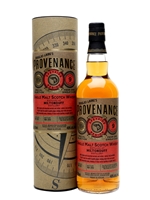 A young but richly coloured Miltonduff from Douglas Laing as part of the Provenance range. This was distilled in May 2007 and bottled in May 2016. This is mouthcoating with notes of ginger, nutmeg and fruit.