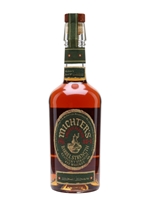 A big, bold rye whiskey from Michter's that was matured in a single barrel and bottled at the strength it came out of the cask at. Aromas of butterscotch, cinnamon, warm toast and cherries fill the nose, followed by notes of vanilla, caramel, oaky spice and freshly-baked bread throughout the palate.