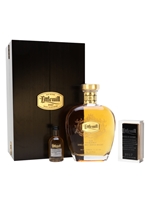 Despite the distillery closing in 1994, owner Loch Lomond has been releasing some of the now-mature stocks every year. The 2017 edition was distilled in May 1990 and has been bottled at 27 years old. Aged in a total of eight refill-bourbon casks, it was married together in first-fill-bourbon barrels. Limited to 500 bottles, this comes in a wooden box with a wooden cask stave, and a miniature so you can try the whisky before you open the bottle.