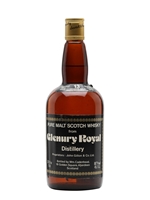 A 1966 vintage Glenury Royal, bottled in June 1979 by independent bottler Cadenheads. The distillery closed by four years after this was bottled and bottlings from this distillery are in high demand.
Please note that this is an old bottle and the closure may have deteriorated; care should be taken when opening the bottle. As such, the item is sold as described.