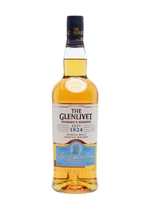 An unboxed bottle of the opening salvo of the Glenlivet range, named in honour of the distillery's founder, George Smith. It's classic Glenlivet, with a creamy and fruity character bolstered by the use of first-fill American oak to mature some of the whisky.