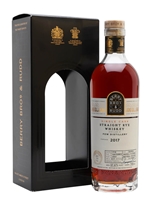 A 2017 FEW rye whiskey from indie bottler Berry Bros & Rudd that has undergone a secondary maturation in an ex-Sauternes wine barrel, before being bottled in 2021. Aromas of peaches in syrup, dried apricot, freshly-baked rye bread and savoury spice fill the nose, complemented by notes of marmalade, toasted oak, dark chocolate, pineapple and black pepper throughout the palate.