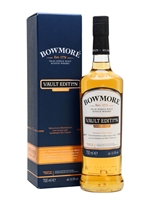 The Vault Editions from Bowmore is a four-part series of whiskies that highlight one characteristic of the distillery's style. The first release is named Atlantic Sea Salt and focusses on Bowmore's maritime style, while displaying its classic smoky and fruity nature.