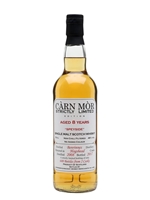 This 2008 Benrinnes comes from Morrison & Mackay's Carn Mor series. Aged in a hogshead for eight years, this is a classic example of the distillery's meaty and malty style.