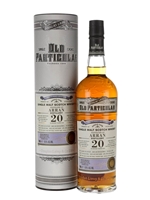 A 1996 vintage Arran bottled by Douglas Laing as part of the Old Particular series of bottlings. The distillery had only opened a year before, having been the first legal distillery on the island since 1837. This is thick and chewy with notes of coffee, vanilla and honey.