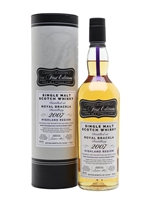 A 2007 Royal Brackla single malt from independent bottler Hunter Laing that was matured in an ex-bourbon cask for 15 years, before being bottled in 2022 as part of its First Editions series. Aromas of pears, toffee and apricots fill the nose, complemented by notes of caramel, vanilla, raspberries, cherries, brambles, black pepper and oak throughout the palate and lingering in the finish.