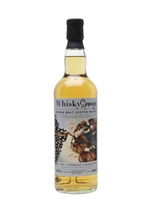 Distilled in 1997 and aged in a single refill sherry hogshead, this bottling of Ben Nevis comes from Decadent Drinks' Whisky Sponge series, known for its comedic labels. This one features an image inspired by Michaelangelo's painting of the Sistine Chapel.