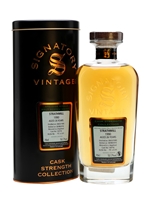 A Signatory bottling of Strathmill, rarely seen as a single malt, but the core of the J&B blend. Distilled on 9 March 1990, this was matured in a hogshead for 26 years and bottled on 30 August 2016 at cask strength – a well-aged example of whisky from the distillery which looks quite a lot like the 2014 Special Releases edition.