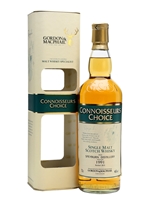 A 1991 vintage Speyburn, bottled by Gordon & MacPhail as part of the Connoisseurs Choice series. This was distilled the same year that the current owner, Inver House, took control of the distillery.