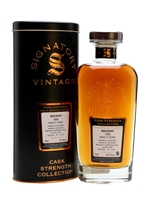 A 1995 Macduff, bottled at full strength in October 2016 by Signatory for the Cask Strength Collection, after 21 years in a refill-sherry butt. You don't see a lot of these about, as most of Macduff's spirit goes into owner Dewar's William Lawson blend.